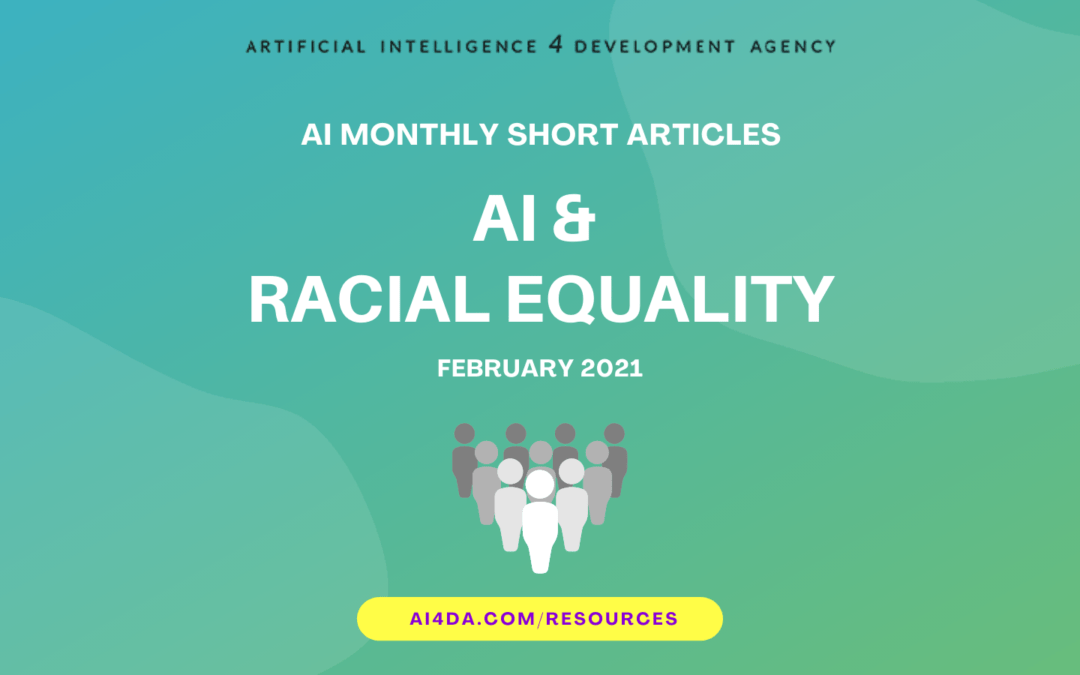 How Human Bias is creating Racist Data in AI

Part of AI4DA’s mission is to prepare Artificial Intelligence (AI) for a better future tomorrow, which is free of any bias and inequality. This aligns with the UN’s Sustainable Development Goal 10 “Reduce inequality within and among countries” [1]. But what is the role of AI in this regard?

What is racial bias?

Also, it is important to know that racial biases are associations made by individuals in the unconscious state of mind. This means that the individual is likely not aware of the biased association. Individuals may not be racists, but their perceptions have been shaped by experiences and the result is biased thoughts or actions. [4] So the racial biases in AI are a form of bias, which refers to the attitudes or stereotypes that affect an individual’s understanding, actions, and decisions in an unconscious manner. [5]

AI and Machine Learning (ML) cases use algorithms to receive inputs, organize data, and predict outputs within predetermined ranges and patterns. Algorithms may seem like “objective” mathematical processes, but this is far from the truth. Racial bias seeps into algorithms in several subtle and not-so-subtle ways, leading to discriminatory results and outcomes Algorithms can get the results you want for the wrong reasons. By automating an algorithm, it often finds patterns that you could not have predicted. Automation poses dangers when data is imperfect, messy, or biased. An algorithm might latch onto unimportant data and reinforce unintentional implicit biases. [6]

How does racial bias materialize in our lives?

One such example of the dangers of AI provoking racial inequality is COMPAS software. COMPAS was used in 2013 to forecast which criminals were most likely to offend again. The software compared 7,000 risk assessments from people arrested in a Florida county, counting how often they offended again. The algorithm turned out to be racist/biased and failed to predict the risk of renewed offending. It was found that black offenders were almost twice as likely as white offenders to be labelled as reoffenders even though they did not actually reoffend while white offenders were found low risk even if they ended up reoffending. [7]

In the healthcare system, the biggest problem with the AI approach was the fact that those less wealthy simply couldn’t afford more extensive treatment, so they chose less expensive options, So considering the algorithm of the healthcare needs on the basis of the amount of money spent on treatment was an exclusive approach, biased towards more wealthy people. Considering variables other than the cost of treatment to estimate a person’s medical needs reduced bias by 84%. [9]

In 2018, research by Joy Buolamwini and Timnit Gebru revealed for the first time the extent to which many commercial facial recognition systems (including IBM’s) were biased. [10] Due to this, IBM quitted the facial-recognition business altogether. In a letter to Congress, chief executive Arvind Krishna condemned the software that is used for mass surveillance, racial profiling and violations of basic human rights and freedoms. [11]

In the case of image-recognition systems, the reason for the bias is that training data that machines use for learning contain mostly samples gathered from the same color people. The solution requires more attention during dataset preparation: we need to represent equally people of color and gender in training datasets, which is crucial for algorithms.

AI free of bias has the potential to tackle the different social issues – such as enhancing social mobility through fairer access to the financing and the healthcare system, mitigating exclusion and poverty through making the judiciary systems more objective, bias-free testing in university admissions, and much more. We should expect fair AI solutions from both technology companies and authorities.

Content strategist and co-founder of Rasa Advising, Julie Polk, has come up with four essential tips you should keep in mind to combat bias in AI:

This website uses cookies to improve your experience while you navigate through the website. Out of these, the cookies that are categorized as necessary are stored on your browser as they are essential for the working of basic functionalities of the website. We also use third-party cookies that help us analyze and understand how you use this website. These cookies will be stored in your browser only with your consent. You also have the option to opt-out of these cookies. But opting out of some of these cookies may affect your browsing experience.
Necessary Always Enabled
Necessary cookies are absolutely essential for the website to function properly. This category only includes cookies that ensures basic functionalities and security features of the website. These cookies do not store any personal information.
Non-necessary
Any cookies that may not be particularly necessary for the website to function and is used specifically to collect user personal data via analytics, ads, other embedded contents are termed as non-necessary cookies. It is mandatory to procure user consent prior to running these cookies on your website.
SAVE & ACCEPT