Country of the Month – Zimbabwe 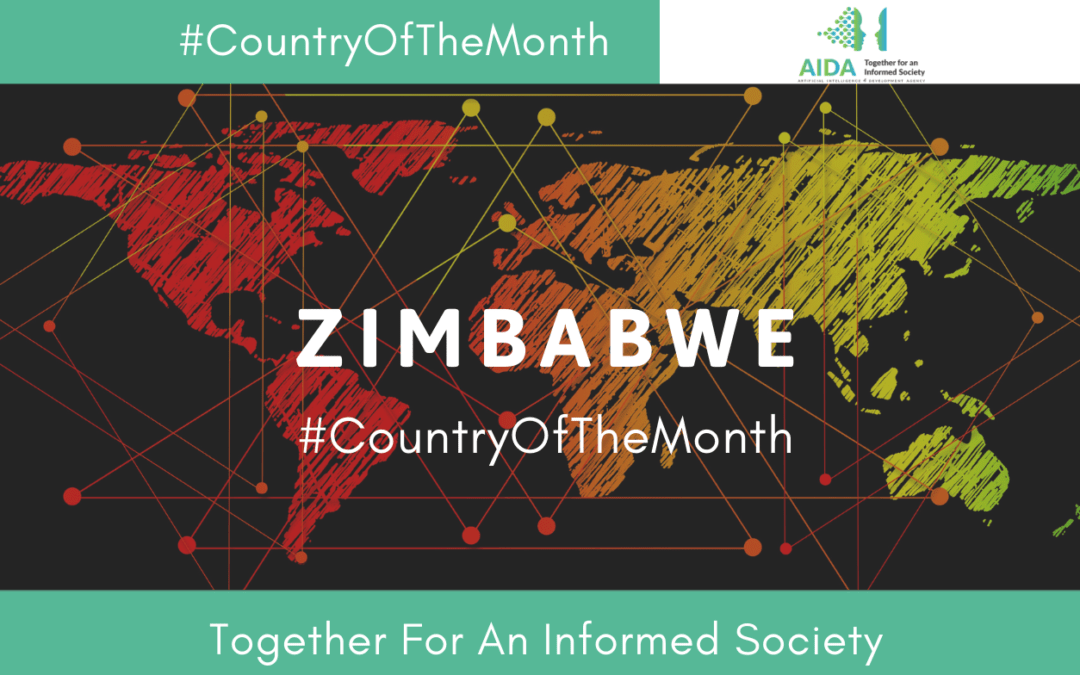 Country of the Month #10 Zimbabwe

Africa is going to be the hub of manpower in the future. The forecast issued by Sustainability Today of the Ontario Tech University says that by 2100 the top three largest cities in the world will belong to Africa: Lagos, Nigeria, followed by Kinshasa, Democratic Republic of Congo, and Dar es Salaam, Tanzania. [1] One way that any African country could meet the expectations and challenges of this rising growth, would be through digital innovation and AI.

Being land of so many languages and one of the main exporters of minerals and agriculture, Zimbabwe has been a small but integral part of Africa. With a fast growing economy, it has slowly started to adapt ‘AI for good’, which makes it a perfect example to look at how Africa is getting prepared for the future.

The Era of AI in Zimbabwe

Zimbabwe is considered one of Africa’s most literate countries. UNESCO’s 2011 Report, estimated that 83.6% of the population was literate. [2] In Zimbabwe, the promise of revenue in the future has made companies invest in AI which has meant that, over the last few years, local organizations have prioritized migration towards digital technologies and some have managed to take advantage of AI.

One example of this trend is the introduction of Batsirai, a chatbot of the Steward Bank, the first of its kind used in the nation’s banking industry. Batsirai assists customers with queries on Facebook, the Square Mobile App and Online Banking. [3]

The country, like many of its African neighbours, is experiencing a boost of Chinese investments, partly due to Africa having looser data-privacy laws compared to other regions in the world. In 2018, the Chinese Company Cloudwalk, signed an agreement with Zimbabwe’s government for a mass facial-recognition project to improve AI’s ability to detect faces with dark complexions, this is done through 3D light facial technology. This made Zimbabwe one of the first countries in the world to adopt this technology. In return, Cloudwalk helps the government to build a smart banking system and to improve surveillance technology at airports, railway and bus stations. [4]

The Future of AI in Zimbabwe

The economy of Zimbabwe grew at an average of 12% from 2009 to 2013 after years of negative growth, rendering it one of the fastest growing economies in the world recovering from negative growth. [5] However, the country experienced a deteriorating economic and social environment since 2000 that resulted in a deep economic and social crisis, industrial capacity utilization of below 10% and an overall cumulative Gross Domestic Product (GDP) declined 50% by 2008. So, the government has designed a new economic blueprint known as the Zimbabwe Agenda for Sustainable Socio-Economic Transformation (ZimAsset) to guide national development into the future. [6]

The goal of the Zimbabwean Government is to integrate the concepts of AI and Expert Systems (a computer program with good performance in a difficult skill) in order to fully use the benefits of ZimAsset. The agenda of ZimAsset is crafted around four strategic clusters with the hope of enabling the nation to achieve economic growth and helping the country to become a stronger economy in the region and Africa. The clusters identified are: (1)Food Security and Nutrition, (2) Social Services and Poverty Eradication, (3) Infrastructure and Utilities performance, (4) Value Addition and Beneficiation.

The plan is that AI and Expert Systems will be integrated to each of the four strategic clusters [7] which is expected to consolidate the gains brought about by the Land Reform, Indigenization, Economic Empowerment and Employment Creation Programmes. [8]

In order to achieve those goals, the government and educational institutes have, in the past few years, organized many training programs to help the youth learn more about the use of AI and its use to make the future better for the people of Zimbabwe.

This website uses cookies to improve your experience while you navigate through the website. Out of these, the cookies that are categorized as necessary are stored on your browser as they are essential for the working of basic functionalities of the website. We also use third-party cookies that help us analyze and understand how you use this website. These cookies will be stored in your browser only with your consent. You also have the option to opt-out of these cookies. But opting out of some of these cookies may affect your browsing experience.
Necessary Always Enabled
Necessary cookies are absolutely essential for the website to function properly. This category only includes cookies that ensures basic functionalities and security features of the website. These cookies do not store any personal information.
Non-necessary
Any cookies that may not be particularly necessary for the website to function and is used specifically to collect user personal data via analytics, ads, other embedded contents are termed as non-necessary cookies. It is mandatory to procure user consent prior to running these cookies on your website.
SAVE & ACCEPT